In 2021 and 2022 we responded to the global pandemic by working on only one production at a time.  It has been our pleasure to be the dyeing, breakdown and textile arts team for designer Angus Strathie on Season 1 and Season 2 of 'Kung Fu'.

In 2018, 2019 and into 2020, the Dye Dept. has looked after all of the dyeing, breakdown and textile arts needs for 'The Chilling Adventures of Sabrina'. This has been a fun and inspiring task for us (and a lot of work!) and we are so grateful to the great team on Sabrina and the trust and support we get from the designer Angus Strathie who doesn't hesitate to throw us new challenges!

We also enjoy continuing to look after specific needs from the superhero shows such as Flash and Arrow; breakdown needs for certain narratives in The Good Doctor, Twilight Zone and Nancy Drew; small and specialized Set Dec textile tasks like Sonic the Hedehog's hammock; and many other single jobs as they arise.

The Dye Dept., now over 10 years old(!), continues having the pleasure of working on many of the film and television productions in Vancouver. Sometimes we do all the dyeing, breakdown and textile arts needed by the Costume department, sometimes specific jobs for Costumes, Props or Set Dec.
In each of 2014 and 2015 we did dyeing and breakdown, and sometimes special skills textile arts, for over 60 different productions.  For some series, we do all that they need for the whole season. For others, we do single projects. Our work continues to include experiments and discoveries as well as tried and true techniques.

2016 was the busiest year yet for film production in Vancouver and proved to be full and fulfilling for the Dye Dept.  Breakdown and dyeing for Birth of the Dragon continued well into 2016; throughout the year we continued dyeing and specific projects with the superhero trio of series Arrow, Legends of Tomorrow and Flash; we enjoyed the breakdown and dyeing for Zoo Season 2; enjoyed the interesting work from Dirk Gently with designer Antoinette Messam, and many more.

In 2017 we worked on a total of 71 productions, primarily in Costumes but also in Props and Set Dec Departments. From subtle ageing to extreme breakdown, one-offs or multiples, the work that comes to us continues to range from the every day to R&D in new territory. Breakdown on the doll figures for 'Welcome to Marwen' (released 2018) was an expecially interesting task.

In 2018, along with our core work of breakdown and dyeing, we hope to continue playing with new mediums, developing costume uses of natural dyes, and experimenting with weaving optical fibres.

In 2010 the Dye Dept. had the privilege of working on many of the film and television productions that came to Vancouver. Sometimes we did all of the dyeing and breakdown needed by the Costume departments; sometimes we worked for Set Dec and Props as well. Sometimes we did speciality work on individual pieces for one or two characters only. A complete client list would be too long, but here are some of the shows we participated in, in 2010: 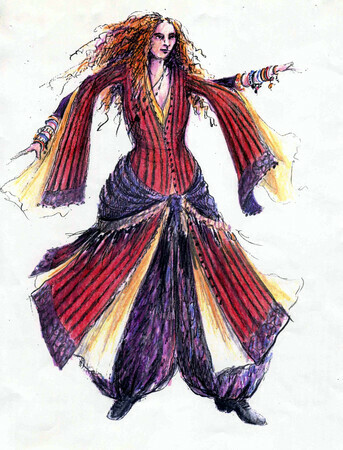 Sketch by Nancy Bryant, for The Snow Queen